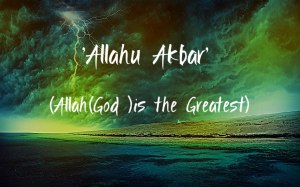 After the Prophet (pbuh) suffered calamity at Uhud and the idolators went back, he feared that the idolators might try to come back and he said, “Who would follow them?”. Seventy men volunteered. This was recorded by Bukhari.

“Those unto whom the people said: “Verily, the people have gathered against you, therefore, fear them”. But it only increased them in faith”, (Quran 3:173).

It means, those who threatened the people, saying that the disbelievers have amassed against them, in order to instill fear in them, but this did not worry them, rather, they trusted in Allah and sought His help. Allah alone is Sufficent for us and He is the Best Disposer of affairs for us”.

Ibrahim said it when he was thrown in fire. Muhammad said it when the people said: “Verily the people have gathered against you, therefore fear them. But it only increased them in faith.

So they returned with grace and bounty from Allah. No harm touched them.