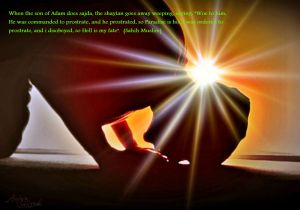 We have so much to be thankful and grateful for. Allah gives to every creature no matter if they humble themselves in front of him and prays to Him or not. He even gives to people whom aren`t muslims. And He gives a lot.

When we talk about the fact that the salat is one of the five pillars of Islam, one understands the it is the foundation of our iman. If we don`t fulfill the foundations of our iman there will be something wrong with our iman. It won`t be like it should be. Some scholars say that a muslim whom doesn`t pray for more than 3 days become a kafir if he doesn`t start praying within those 3 days.

Why do we pray? Why is it one of the foundations of Islam? Is it because when we pray we are giving back to Allah for everything He has blessed us with? But He even gives to non-muslims that does`t pray? Our prayers are not a business transaction between us and our Lord. That only if we pray, He will grant us. He gives in abundance no matter what. Just look at the non-muslims. They have achieved a lot even if they aren`t muslims. Though it all will go to waste on judgemnt day, when they will be the biggest Losers. Without Iman (believing in Allah and being a muslim) all their good deeds will become to dust. I was listening to a lecture from brother Yasir Qadhi and he said something very important to understand and know. We pray because Allah is worthy of praying to. SubhanAllah! Wonderful said. He is the only ilah (God) which is worthy of and can respond to our salats, supplications and prayers. Even if we don`t pray to Allah, He is still Magnificent and nothing in His Glory would become any lesser if we don`t follow our Islam.

Brother Yasir Qadhi quoted that when the world will come to an end, and every creature of Allah will die, even the angels lives will come to an end. While dying the angels will say; SubhanAllah we have not been praying to you Allah like you are worthy of being prayed to. SubhanAllah! And the angels has prayed to Allah all day and night since they were made. Not a single moment do they do anything else than what Allah has said them to do or do they stop praying to Allah Subhanatalah! Magnificent! Allah is the Greatest! Allah does listen to our supplications and prayers. Even that is in the prayer/salat, after we do the ruku we say “sami uliman hamida, Rabbana lakalhamd”. Meaning the one whom Glorifies Allah and Praises Him, Allah has heard him and responds, and all praises is for our Lord Allah.

The present of prayers was given to the Prophet Muhammad (pbuh) when he visited Allah on the Miraaj. It was a special gift, that`s why Allah asked the Prophet to come to Him. At that time, the Prophet was in one of his most difficult times because Khadijah Ra had passed away, and his Uncle passed away as well. So some of the people who was his support and those he liked the most was not anymore, and the Prophet was being mistreated by the people, because he was giving dawah for them to come to Islam. That`s when Allah gave him a gift he could find comfort in. The Prophet has said, “In this world, women and perfume has made dear to me, and I find joy in as-Salah”. The Prayer was something that was going to help him through his (pbuh) difficulties, and give him support in good and bad times. And so it is a very great gift given to every person in this world. How are we utilizing this gift? Are we using those tools that can help us and makes our lives and Akhirah better? If not it is surely time we change and get our priorities right, in sha Allah. Ameen Allah humma ameen.

In another hadith he (pbuh) said ” let`s find joy in prayer, O-Bilal, he (pbuh) did not say: “let us get it over with and done with”. When we don`t have khusho we often rush through salah. But it is known that a salah without khusho will not be accepted by Allah. Let us for our Akhirah`s sake learn to better our khusho, so that all our prayers aren`t those deeds that get thrown away, in sha Allah.

One thing is for sure. If we follow the guidelines that Allah has ordained for us we will surely prosper, not only in this world, but surely in the Hereafter, which is our final home. I hope that we muslims will try our best to not be negligent and that we fulfil every duty that Allah has given us. May we one day experience the delights of Jannah and be saved from the torment of fire in jahannum. Ameen summa ameen. Remember the whole Ummah in your prayers and supplications.