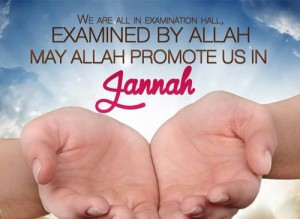 A common quality amongst friends is that they support each other through all kinds of difficult times they experience. Often people help others and usually expect that their favour will be returned some day. Prophet Muhammad pbuh has said that those who doesn`t thank people doesn`t thank Allah so a good way to show your appreciation to Allah is to thank the ones that help you. What kind of circumstance you help another person in, depends on your own taqwa, godfearingness.

You Can Share In The Burden Or The Reward

In Ayat 5:2 in the Quran it is quoted “Help each other in Al-Birr and At-Taqwa; but do not help one another in sin and transgression”. It is not difficult to imagine that if we help some people in committing sins we will share in their burden for every people they wrong and those that learn the cruel tactics from them. Similarly if we help people to do something that is good for the community, we will also share in the reward for all the good that it leads to. It is up to us we want to earn reward or share the way to our destruction.

Be Just In Every Relation

Prophet Muhammad pbuh has said if people see something bad they should try to stop it, either with their hand or speech or at least think of it as something bad, if they are not able to stop it, and that is the weakest of Iman. It is very important that we try our best to be just in all our relations and in between each other. A father being just between his children. Spouses treating their in-laws justly. A husband being just between his spouse and sisters. A wife being just to her parents and siblings. We are human and bound to err sometime, but the best of those who err are those who repent. And then make amends. Whenever we see that we are on the wrong track, simply rectify our actions and change the track to something better. It is not fair that the faults of a mother is passed on to her daughters or a fault of a brother passes on the his siblings. Being just between different relations is not an easy job. One of them may not like you if you take the others side. That is why it is so important to make sure that you know whom is correct and that you are not taking the side of those whom are wrong. Supporting someone who is doing something wrong will increase his confidence and can lead him/her to do worse deeds in the future. If that happens you will have a share in the bad deeds that it leads to, until or if they make amends and come to the straight path.

When We Don`t Stop Injustice

Prophet Muhammad pbuh has said: “Help your brother when he is unjust or the victim of injustice”. The sahaba said: “we understand that we should help people if they are unjust, but how can we help them if they are victim of injustice. Prophet pbuh said: “Prevent and stop him from committing injustice and this represents giving support to him”: Maybe you have heard about some people who lives in a town and the most of them where really bad people. So Allah said to the angels, go and crush the town because of their deeds. The angels went there when they saw some people who were good and was praying to Allah, so they went back to Allah and said: ” how can we crush this town, when there are good people living there”. Allah said: “It is because of this that I want you to crush them as soon as possible. The good people didn`t stop or try to prevent the bad people from doing bad deeds, so I want you to crush them all.

Being Patient With People`s Annoyance

Of course you can imagine if there are only a few good people in a whole town how hard it is for them to stop the others from doing bad deeds, thus even bigger is the reward. Prophet Muhammad pbuh has said: ” The believer who mingles with people and is patient with their annoyance, earns more rewards than the believer who doesn`t mingle with people and does not observe patience with their annoyance.

Don`t Look Down On Those Whom Are Struggling

It is important that when we see other people struggling to avoid sin that we try our best to help them or at least not put more obstacles in their way. We don`t know our end, no one does. Prophet Muhammad has said that was a person whom had taken 99 lives and then repented, and by the Mercy of Allah, he was forgiven. Allah is Merciful and forgives all sins as long as we sincerely repent. Don`t look down on those that are struggling today, there might come a day when those same people will be the ones that help you on your way. So if you are able give them a helping hand, do it. When Allah wants something good for His slave, He helps others through him. Imagine you are sleeping and several good deeds are put in your account for those people you have helped, you don`t even know it. Never belittle a good deed. We don`t have to be rich to give sadqah. One can do that even without any amount of money, that also is sadqah.

Allah Knows And He Rewards

Know that even if people don`t see the good that we do, Allah knows everything, and it is He whom is the only One whom will give us reward. He doesn`t forget. The reward of those who do good is never lost. The struggle is real; Be good, do good, and if you can`t stop others from doing bad, at least think of what they are doing as bad, don`t put hurdles in others way when they are struggling, pray for each other, and help those you can, one day you might need their help. Allah puts us in the most amazing places, sometimes to teach us something, other times to, test our patience. May we pass every test, and may Allah give us barakaa in our lives a good akhirah. Ameen summa ameen.