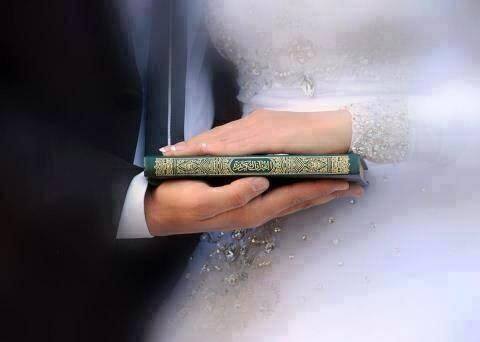 A double standard of the muslim community I wanted to talk about in this post is about marriage. This is something each and every will go through in their life, and there are several things about this topic that makes one think whether our conduct in this regards is correct or not.

Since parents are born in another time then their children, they often have another thought about their ideal for their children’s marriage. Here it is very important that before getting into the process of finding a suitable match, they talk together and agree about what the child wants. The reason is that it is not the parent that is getting married. It is the child. That persons preferences is the most important. Often parents choose spouses for their children without even asking them properly, which later result in breakage of the bond. Things like manners and their practice of Islam should be weighed heavier than looks, income etc.

What is very common in the muslim community is that the parents think that if they marry their daughter to a rich person, she would be happy for the rest of her life. That is not correct. As your daughter is not married to the money her husband owns, but to him. Rizk is in the hands of Allah. He will test us in loss of wealth, hunger etc. A rich person today can lose his job tomorrow just like a person without a great income can get a great job-offer the very next month after marriage. It is not in our hands, it is merely in the hands of Allah.

Often parents don`t want their children to marry earlier than finishing their degrees at the university or getting a decent job. After all how will they be able to have enough money to be able to support another spouse. And what about their future? So the child want to get marry, and is asking for the parents consent, and they are turning him down. As they are opening his eyes to the world of darkness, because when a person gets into an age of adolescent, their desires can come in their way. And they can be misguided by the free environment we have in the West and now also back in our country. These thing often result in the guy and the girl, having relations before their parents let them marry someone. To parents: are they mature old enough for these relations but not for marriage? Have you given them proper islamic education as to how they will keep themselves away from haram stuff.

When parents approve a spouse after a long process they have to plan a big and fancy wedding. So that could take years to plan and thousands to earn. Meanwhile , the now engaged couple, are having a very openly environment where they meet, and everyone is ok with that. The parents are actually opening the gate of Jahannum to them. First of all, the sunnah of marriage is simpleness. As simple as it could be. Our Prophet has married sahabis with one single date, fruit. Here we are talking about lakhs and lakhs and fancy dressing, three coarse meal and of course a pre- and after partying, mix gender wise. No wonder the baraakah of marriage are long gone before the couple gets married and result in breakage, when they use more time in planning the marriage then in the marriage itself.

Another double standard of the muslim community is the age of the wife to be. She has to be young, and a virgin. Yes, I know that our Prophet pbuh did say to the sahaba`s that they should marry young, fertile virgins, because he wants a large amount of people in his Ummah on the judgement day. But have we forgotten that he married only one virgin, and she was not able to get any child? He married a lot of women that had been previously married, with kids for example his pbuh`s first wife, khadijah. So most of the men are hurrying trying to find a suitable young, virgin girl, while the widows and single parents are having difficulties getting married because the society doesn`t want them anywhere. A few people even say that they can`t marry after becoming a widow, but the sunnah tells otherwise. We also have a high divorce-rate in the society, which means there are an increasing number of these women. How can we change the thought of young men to choose a spouse that can make them become as close as their to fingers in Jannah with the Prophet pbuh, by marrying a widow, or divorced with children. By that they will become father of orphans and making sure that they will get supported. All the choice these women have is between earning money and raising their children. The society is not making their life easy at all.

Yet we have another issue about marriages. Often we see people are very selfish in not helping people to get married. They want themselves to be first and get the best one. Whether other women of the Ummah will get a spouse is not their tension. Often people know about some that are single and looking for a spouse, but they will not help them, to tie the knot, just because it is not their responsibility. Often if two people like each other and wants to get married, people will put hurdles in their way, often out of jealousy, because they are a great match. The third point is the converts. Who will help them in getting married. They often don`t know enough people and don`t have references of being a muslim as long as someone born muslim, that might be more progressive than them, after they accepted the rules of Islam, when they converted.

Yet a very important and less discussed aspect about marriage is maturity. Often the people whom are getting into this new relation don`t know the ABC of marriage. What it means to be a husband / wife in Islam. What is the wifes /husbands rights and their duties towards each other. Purity. Children. etc. If they are not familiar with this, the marriage could end disastrous. Often we see that a few guys get married because their parents insist in it, and because they didn`t have the son`s consent he does not treat his wife in a good manner. Consent of those whom are getting married and their maturity should be valued. If a person is bad before marriage, simply marrying a girl from abroad will not make him better. If you as a parent can`t change him, how can you expect a girl whom hardly know him, to change him. Marriage is a lot of responsibility and one should be ready to carry it`s weight.

Both the parents and the children need to talk together and look for each others consent. If people don`t help the women in the community to get married and making their life easier, they are far away of the sunnah of our Prophet pbuh. It is important that we as an Ummah try to make people`s life more easy and not difficult. We have a responsibility to make the best of what we can do. If every family spend less on their marriage and give away sadqah to those who can`t afford one, the barakah of their marriage will be increased. May Allah help us help others. ❤ ❤ Ameen summa ameen.